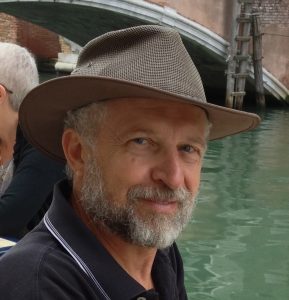 Barry Leff is both a rabbi and a businessman.

He’s currently serving as the interim rabbi for Temple Beth-El, a Conservative synagogue in Birmingham, Alabama. He normally makes his home in Jerusalem.

Rabbi Leff had a 20-year career in California’s Silicon Valley in general management and marketing. He was CEO and co-founder of Peninsula Engineering Group, a manufacturer of telecommunications infrastructure equipment. He grew the company from nothing to 90 employees and a $10 million / year run rate; he raised $4.5 million in venture capital for the company. He also worked as a product line manager for the Dutch electronics giant Philips, and as VP-Marketing for semiconductor firm IC Works.

In 1998 Rabbi Leff felt called to the rabbinate, and he left Silicon Valley for rabbinical school in Los Angeles. After ordination in 2002, he served congregations in Vancouver, Canada, and Toledo, Ohio, for five years. In 2007 he made aliyah (moved to Israel) with his family, and went back to work in the business world. He worked in outsourcing for five years, serving as General Manager of Innodata’s Israel operation. In 2013 he co-founded Tek-Law Services, Ltd., a small Israel-based firm that provides marketing services, primarily to American and Israeli clients.

He has served on many boards, including the American Electronics Association, Golden Gate University, Rabbis for Human Rights, and the Schechter Rabbinical School.

Rabbi Leff served a tour of duty in Southeast Asia with the US Army Security Agency at the end of the Vietnam-era.

He’s also a Certified Flight Instructor, SCUBA Divemaster, black belt in Tae Kwon Do, and runs marathons. He’s a co-inventor on two US patents in the field of cellular mobile radio.

He blogs on topics other than business ethics at www.neshamah.net .